AK-7 & AK-26, Lhokseumawe – Speaking in Lhokseumawe on Friday August 5, the commander of the Iskandar Muda territorial military command, Major General Supiadin AS, said that there are parties who want to thwart the signing of the peace agreement between Indonesia and the Free Aceh Movement (GAM) on August 15.

The possibility that there are parties who want to thwart the peace process was raised by Supiadin when speaking to 256 village heads and public figures from 13 sub-districts in northern Aceh, Lhokseumawe and Bireuen.

Although he said there are parties which want disrupt the peace process, the former commander of the Udayana territorial military command in Bali did not say which party wants to thwart the peace process. “It is because of this [possibility], that I want to convey this to you gentlemen and ladies, so that you don’t mistakenly accept [such] information”, he said.

Supiadin is asking people not to be influence by parties who are saying that Aceh will be independent after the peace deal is signed on August 15. “Don’t listen to it. It’s totally wrong”, he said. “So if there are mischievous [parties] in the field I’m not prepared to say who they are. But it is difficult for me to say it’s GAM, they will then deny it yes, possibly it’s the TNI”, explained Supiadin.

Supiadin, who recently replaced the former Aceh military commander Major General Endang Suwarya, said that GAM has already recognised the Unitary State of the Republic of Indonesia, are not asking for independence or a referendum and has agreed to destroy the weapons they posses. “This means everything will turn out peacefully. Then what about me as the military commander in response to troops in the field. Because the TNI want’s to show to the international community, to GAM and to the public [its commitment] (with regard to troop withdrawals)”, he said.

Furthermore he said, before the peace agreement is signed, the TNI would have already withdrawn its troops, particularly those who were in the forests who will be deployed on the outskirts of villages. “The TNI truly wishes to build peace in Aceh. It is because of this, the TNI doesn’t want it to be again said that they are the party which will thwart the peace process”, he said.

The withdrawal of TNI troops he repeated will be done in accordance with the number of GAM weapons that are destroyed. But, “I still don’t know the details of the peace agreement”, he said. [dzie]

PRA appeals to public not to be provoked by bomb attacks
Aceh Kita – May 7, 2007

One year after peace deal thousand take to the streets
Detik.com – August 15, 2006 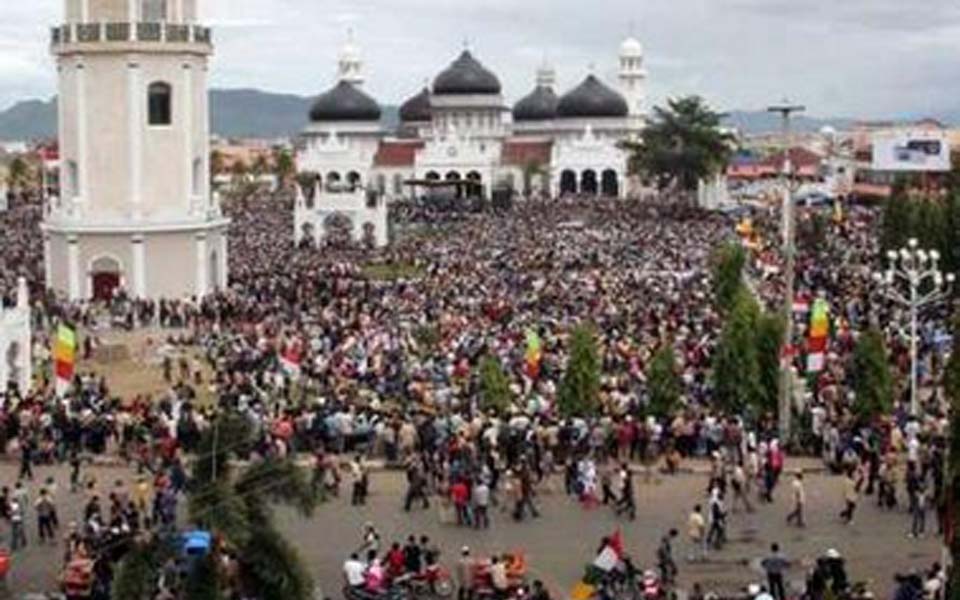