Reiner Brabar, Jayapura – The Papua People's Petition (PRP) as the group responsible for the simultaneous actions with the principle agenda of rejecting revisions to the Special Autonomy Law (Otsus) on Papua, opposing the planned creation of new autonomous regions (DOB) in Papua and calling for a referendum in West Papua, read out the following statement today, Thursday July 14.

Statements with the same content were read out at all of the places where simultaneous actions were held today.

On Wednesday afternoon, before the end of the mass action on the grounds of the Regional House of Representatives (DPRD), PRP national spokesperson Jefry Wenda personally read out several points in the statement to the government of the Republic of Indonesia.

The following is the content of PRP's statement at the simultaneous actions today:

On June 30, three draft laws on new autonomous regions in Papua province were enacted into law through a plenary meeting at the House of Representatives (DPR) in Jakarta.

The deliberations were done based on Article 76 in the revisions to Law Number 21/2001 on Special Autonomy for Papua through Law Number 2/2021. The Papuan people responded with demonstrations against the new provinces in Jayapura, Jakarta, Wamena, Paniai and Yahukimo. It is quite possible there will be more such actions taking place in Papua, Indonesia and internationally.

The Papuan people are aware that the creation of the three new provinces has long been planned and that these laws are part of the colonialism of the Papuan people. And because of this why the deliberations on the draft laws on the new provinces and the Otsus before this were agreed to unilaterally. They are being used to maintain Indonesia's colonial power in West Papua.

The Papuan people have rejected Otsus with full awareness because, first, Otsus was created by Jakarta to dampen the Papuan people's movement demanding independence for the West Papuan nation.

Second, based on this law, Jakarta facilitated the process of creating West Papua province along with new municipalities, regencies, districts and so forth. As a consequence, a great deal of polarisation occurred. The consequence of the practice of creating new provinces, regencies, right down to the village level, which is totally without basis, was that the dynamics of democracy in Papuan social life has shifted significantly towards identity politics based on skin colour, between the highlands and lowlands, tribes, clans and based on interest groups. So with the creation of three new provinces there will be massive competition compared with the situation beforehand. The fate of indigenous Papuans whose population numbers are very small compared with non-Papuans in the land of Papua will be that they are faced with conflict and suffer divisions.

Third, on the other hand, the reality is that Papuan people's lives are far from what can be called prosperous. The state of healthcare in Papua is poor and malnutrition continues to increase, illiteracy levels in areas producing gold, oil and gas are the highest in Indonesia. Poverty is also the highest. The irony is that Mimika regency is an example of one of the poorest cities in Papua, yet the huge PT Freeport gold and copper mine is located there. And there are many more problems in other sectors.

Fourth, the reality of social life in Papua and West Papua provinces is that marginalisation is one of the forms of colonialism in West Papua. Out of the total number of Papuans which are few they encounter the problem of the availability of productive labour, with [jobs] being filled [my migrants] in all sectors in new autonomous regions. These conditions of colonialism are a consequence of the slow development of Papuan human resources. And in fact the massive divisions as a consequence of the politics of divide and rule between Papuans based in the provinces, regencies, districts and the villages.

Fifth, regional expansion will also result in additional TNI (Indonesian military) and Polri (Indonesian police) posts in the land of Papua. This is because the Indonesian government is still using a militarist approach in Papua. Between 1962 and 2004 at least 500,000 Papuans died during a series of 15 large-scale military operations. Then over the last four years military operations have taken place in several regions. In 2019-2020 military operations broke out in Nduga regency, followed by Puncak Jaya, Intan Jaya, Yahukimo, Kiriwok and in Aifat, Sorong. These military operations had a huge impact resulting in damage and losses for civilians: internally displaced people, terror, human rights violations and the loss of homes and property. This situation made it difficult to access education and healthcare, let alone access by journalists. Meanwhile the security and comfort of Papuans in the big urban areas is also very much in doubt. Papua is the island with the highest death rate. One of the reasons for this is because of killings by unknown perpetrators. Aside from malnutrition and hunger, deaths in large numbers are also caused by military operations.

Six, the creation of new autonomous regions will benefit the capitalists. This is because regional expansion has the potential to make available the assets required by capital in Papua. For example, the construction of roads, urban infrastructure and other vital assets such as the construction of ports, airports, highways and the opening up of villages previously considered isolated. These prerequisites are very much needed to support and accelerate the transportation of raw materials in Papua to advance the production of goods made in Europe and other capitalist countries. Access to capital was the spirit behind the forced annexation of Papua as part of the Unitary State of the Republic of Indonesia (NKRI). The forced incorporation of Papuan into Indonesia is the root cause of the historical problems for the West Papua nation. It is this root problem that must be resolved. Extending Otsus and opening up new regions will never resolve all the problems of the West Papuan nation.

Because of this therefore, we who are part of the Papua People's Petition demand the following:

We call on all the people of West Papua to unite and fight to win the ideals of genuine liberation for the West Papuan people.

For the attention and support of all the people of Indonesia and West Papua, we express our gratitude.

122 organisations and 718,179 Papuan people voiced their opposition to the extension of the Special Autonomy Law.

Why do the Papuan people reject the creation of three new provinces?
Arah Juang – July 14, 2022 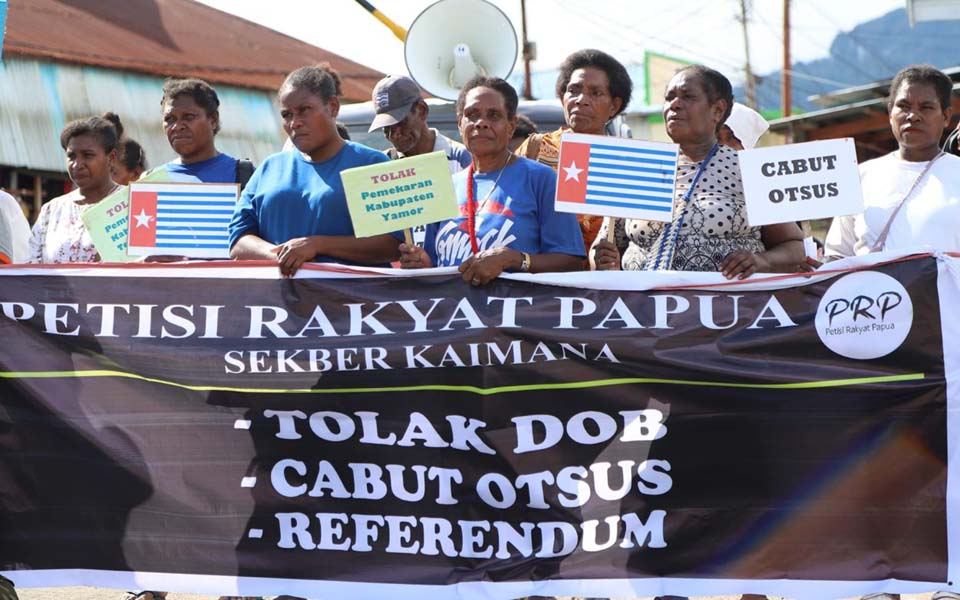