Jakarta – Papuan activist and former political prisoner Filep Karma says there are differences in how demonstrations proceed in Papua and Jakarta. He says that in Papua, demonstrations are not as free and easy as in Jakarta.

“I feel [that there’s] discrimination. In Jakarta I took part in a Kamisan [Thursday Action] near the Palace, it went smoothly. [But] Here in [Papua] far from the Palace, why isn’t it allowed”, he said in a direct broadcast from the Amnesty International Indonesia Instagram account on Tuesday August 11.

Kamisan Actions, which are held routinely every Thursday in front of the Presidential Palace in Jakarta, are aimed at demanding state accountability for cases of human rights violations.

Karma, who was inspired by these actions, said he once held a similar protest in Papua. The first time they planned a Kamisan action, he provided a written notification with the police.

The action was held successfully. He related how they protested until 6 pm then disbanded voluntarily and held an internal discussion for one hour.

The following week however, after providing a written notification of the action, the demonstration was blocked by the police who also seized protest materials.

“The reason was that it was not allowed by the Kapolres [municipal police chief], Kapolda [regional police chief]. I told them it’s allowed at the first ring in Jakarta. How many rings away from Monas [the National Monument near the Presidential Palace] is Jayapura”, he related.

Since then they have not been able to hold Kamisan Actions like the one’s held routinely in Jakarta. He said that they will try to hold a Kamisan Action in the lead up to or after this year’s August 17 independence day.

Aside from this, Karma said that they are often accused of being rioters when they hold demonstrations, yet he feels that they always prioritise expressing themselves through peaceful demonstrations.

Karma related how each time they hold an action they always form a line or hold a length of string to ensure that the participants remain with the limits of the “command line”.

He suspects that there are rogue rioters who are accused of being part of his group. This he said, gives rise to a negative stigma and smears the good name of his group.

“Before you know it, there’ll be riots somewhere else. But we get accused. Because the ones [who riot] have dreadlocks, beards. So they imitate our peaceful actions. So Papuan and non-Papuan people can’t differentiate”, he continued.

Earlier, the National Statistics Agency (BPS) recorded that West Papua province had the worst Democracy Index in the country for 2019. The Democracy Index for West Papua was even the only one to be categorised as poor scoring 57.62 points.

This figure is a decline in the score for West Papua in 2018 when it stood at 58.29 points. The Democracy Index is categorised as poor if it scores below 60 points. (fey/wis) 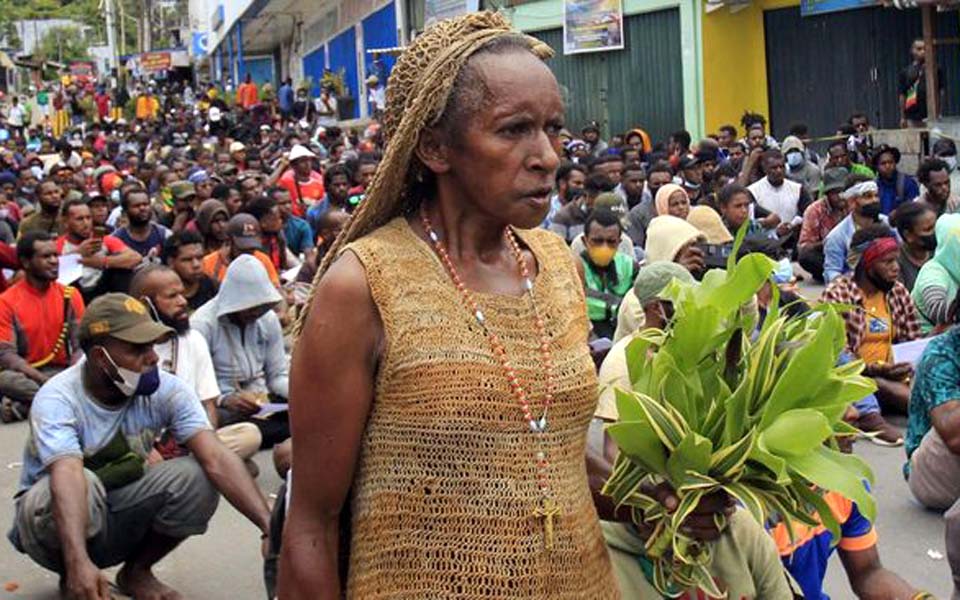 Stop the repression, arrest and criminalisation of peaceful Papuan protesters
Joint Statement – May 11, 2022

Protester critically injured by rubber bullet at rally against Papua carve up
CNN Indonesia – May 10, 2022